Learn how to create and follow a flow of 3D letters, in order to form fluidly words or phrases.

In this new tutorial, we are going to deepen our knowledge of 3D animated typography within After Effects.

This tutorial is workable from the CS4 version, but you will need to have the CS6 version for the optional part which allows you to extrude your letters in 3D and give them depth.
The second part of the result video shows what we have been able to achieve with CS4.

We are going to learn how to create a flow of 3D letters, which we will follow with the aid of After Effects virtual camera.
This will allow you to make words or multi-line sentences appear in an elegant, fluid and dynamic way.

Tip: To create a shadow catcher on versions prior to CS6 (which do not have the option to display shadows only), you have to untick "use lights" and switch the blending mode to product, as on this capture.

Recorded by Mattrunks
Published on 28 August 2012

CS5 does not contain the 3D extrude feature. Letters will be flat, like paper. The CS6 project is also included, with extruded letters. 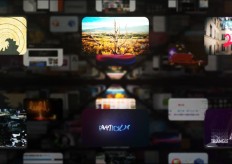 Learn how to create and animate a dynamic 3D grid with your images and Trapcode Form 2.

Finally, we have see this English tutorial,thank you!

Hi I don't know if questions are still an option but if so, I'd like to ask one: assuming that instead of using 3d trace engine for 3d I use the updated method of element 3d plugin and attache all partical replication positions to the transform position of the animated text layers. and have these layers to be the customized layers of which element will extrude from. how come it only work for the first text layer, but the second text layer and the third are not showing like they should? as if the camera cant recognize them because they are too far away?
Have you tried doing this procedure instead of the past sc6 ray traced 3d option? is working with element in this case is possible? Hope my question is clear, cheers, Danit