Learn how to Insert a text paragraph into a video with 3D tracking, and then how to make explode all the letters in 3D space.

In this video tutorial on After Effects CS6, we will integrate an explosion of typography into a filmed scene. We'll use the 3D tracking tool included since CS6.
As a reminder, a free tutorial dedicated to this effect is available here.

We will see how to quickly add a shadow catcher on our video, with a camera and lights to match the scene.
We will then create a text layer containing several paragraphs, and integrate it realistically on the filmed paper sheet, before making all the letters explode (in a slightly less realistic way, of course)!

For the scattering into hundreds of letters, we'll use a combination of text animations to get a dynamic and gradual explosion, triggered line by line before a stabilize state, while keeping a slight movement of levitation.
All the text remain fully parametric, and you can change the contents of the text layer on the fly.

Recorded by Mattrunks
Published on 03 April 2013

The video used is included in the project. Attention, the more the number of words (and letters) is important, the more the calculation time will be long. Each letter will be considered as a 3D layer, a relatively powerful machine is required to enjoy this tutorial. A bonus text animation is included.
Similar tutorials 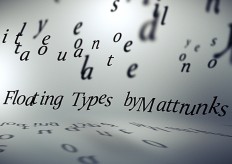 Advanced Animation character by character from one text layer for a medium result.