Learn the technique of camera mapping using a photography, with the Cinema 4D R14 Studio camera calibrator tool and typography compositing on an urban photo-realistic scene.

After Effects
101 min hard
Unlike mentioned in this tutorial, the project files is not available to download. You will have to reproduce the techniques on your own photos.

In this video tutorial on Cinema 4D and After Effects, we'll learn how to create an animation on a photo-realistic scene with the help of camera mapping.

Then we'll add an effect commonly known as the “tilt shift effect” using the camera lens blur in After effects. And finally we'll see how to export 3D coordinates data from Cinema 4d towards After Effects in order to create volumetric effects that perfectly matches the 3D animation.

The new tools implemented in Cinema 4D R14 allows us set up camera mapping scenes very easily. With the help of the camera calibrator, the only thing you need is well placed guidelines to re-establish the position of the camera that was used to capture the shot. Once this position is obtained, we'll use the camera to project the image on 3D objects, thus recreating volume in the picture.

Most recent versions of After effects (CS5 and later versions), includes a new tool that makes it possible to re-create depth of field within a scene using a rendered Z depth pass. We'll learn how to hijack this tool to obtain the tilt shift effect.

Thanks to a partnership with iStockphoto, you'll soon be able to download the photo used in this tutorial for free upon subscription, or if you already have an account.

Thank you for coming back in a few days to get the download link.

Recorded by Fcome
Published on 18 March 2013

Want to go further? These other tutorials deal with the same topics: compositing modeling mapping 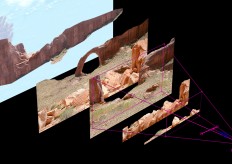 Give life to a photo using multiple planes

Learn how to animate a photo using the multiple planes technique. Preparation of the photo in Photoshop before importing it into After Effects. 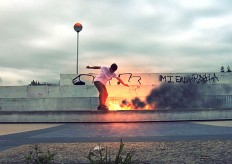 We will recreate fire with Trapcode Particular, and then integrate it on a Skateboard video with some compositing.

Rather than manually position a new camera with all that copying and pasting, why not just duplicate the original camera and the delete the calibration tag – much easier.

It will be nice to download the video so we can watch it without an internet connection. Thank you.
Great tutorial.

Great tutorial! Sorry if I missed this, but how do we cast the shadows on the street below the text? Thanks!

great tutorial, though I would love to be able to download and speedup while listening, maybe it just me but the fact that you stop speaking at the end of every sentence is distracting :(

good tut! this is helpful for me~

Lovely tutorial.
I will so appreciate it, if the tutorial can be download by me for easy follow up, thanks