Western Sunrises - The iPad in the creative workflow

Whitney Alexander is an American Motion Designer and director based in Philadelphia. He has recently realized a music video for Art Decade, garnering buzz for having been, in part, created using an iPad. The tablet played an integral role in the creation of the video, which you can check out for yourself below.

The iPad As a Production Tool

The iPad application ProCreate was used in this project. It’s a true Photoshop-like application that rests on touchscreen technology. Below, you can see it in action, used for both designing and animating character outfits must like traditional designers do: 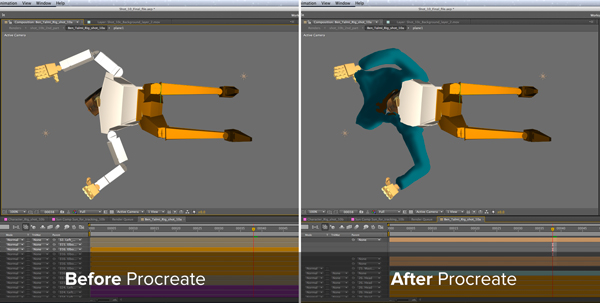 After Effects for animation

Of course, not all of the video’s production was conducted on a tablet. Once the storyboard and the first frames were created, the primary animation was completed in After Effects.
The oceans, along with the sky and clouds, were created thanks to the Trapcode series of plugins: Psunami, Form et Particular.

The impressionist-style illustration comes from the Video Gogh plugin, created by Re:Visions Effects, authors of twixtor. 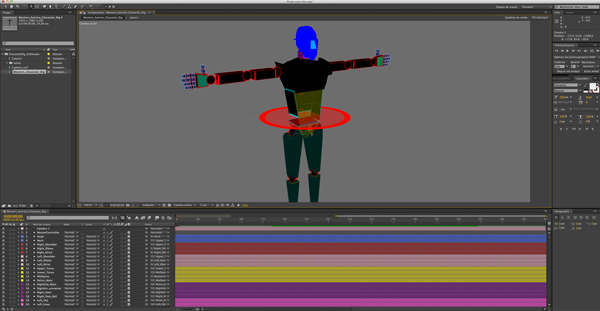 The main characters were created and animated entirely within After Effects. The movements of each character were impressively controlled by a manipulating each body part.

More than 400 layers compose the character, and Whitney has been kind enough to let me share with you all his After Effects project! Below, you will find a link to download the character file, all quite impressive from start to finish:

Tablets in the Creative Workflow

Tablets have been recognized as the future as we know it for personal computers; for individuals, this is no longer even a question.
But when does it begin to play a role in the  creative work of professionals? What place can it take among the tools we use in the production of our projects?

A complement to Desktop Applications

With the spread of cloud computing and cloud storage, it’s become quite easy to switch from multiple devices, all using the same files. For the moment, tablets haven’t come to completely replace the desktop in this line of work, but they can start taking over a significant portion of the work, particularly in pre-production.

Adobe has recognized this, releasing a range of products for tablets: Touch Apps.
When you create a project using Photoshop Touch, you can easily cross over to working on the same project in Photoshop to finalize it without having to move files around.
Workflows of this type will become more and more prevalent and natural for designers through the course of a project’s development.

With tablet applications such as Eazel, Color Lava, and Sketchbook, the border between technology and real-life is disappearing more and more.
It will be a while before we see an abandonment of drawing pencils and pens. Still, like vinyl records, digital options will inevitably be the face of the future. If this isn’t already the case.

Eventually, computing power and the quality of tactile interfaces will be even higher, ensuring that tablets will become indispensible in the creative process.
The advantage of tablets is that they consume little power, power being a limiting factor in the performance of many applications. Software based on the iPad typically use newer technologies and more effectively harness the power of the GPU. This is a big difference from the traditional desktop, which, for the most part, is built on older foundations and evolves much more slowly.

After Effects on a tablet? Today, this is just a dream, but one day we'll be able to create animation with our fingertips!

Do you already use tablets in your workflow? When do you use it and with which applications?
Connect on the forum to share with others all that you know about tablet applications!

written by Mattrunks
Published on 15 June 2012 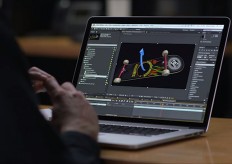 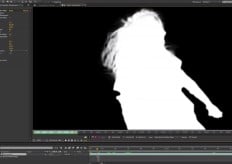