After hundreds of thousands of views on vimeo, few of you should have missed Shave it, the colorful short film from the argentinian studio 3dar . But when Jorge Tereso, artistic director of the studio asked me if I wanted to talk about it, I could obviously not refuse. If you have not seen it yet, give yourself these next 4 minutes!

In the wilderness of the forests where giant bulldozers are tearing apart the woods there is a monkey that accidentally finds a shaving machine and decides to use it. Spontaneously disguised as a human being, he moves out to the city and starts a career. After a stunning success in business, he understands the need of gaining political power. Not too long after, he becomes the president. Now he is ready to make a change.

Jorge and Fernando Maldonado, directors of the film, wanted to create an ironic reflection about how nature adapts to the human invasion. Using saturated and vibrant colors in their 3D and 2D animations, they were able to get an original graphic treatment.

Some details from the studio

One of the main technical goals we had was to be able to blend the 3d animation with the 2d backgrounds. A long period time was spent testing different aproaches to the problem. What we ended up doing was going back and forth between the two worlds and taking them closer together.
The shading had to be simplified to give a more 2d look without loosing the volume of the shapes, and the same thing happened with the backgrounds.
At the end we added a strong layer of 2d effects animated by hand as a kind of artistic motion blur. Subtle enough to add a lot but not disturb the eye of the viewer.

You can find images of the storyboard, concept arts and more on this dedicated website.

written by Mattrunks
Published on 17 April 2013 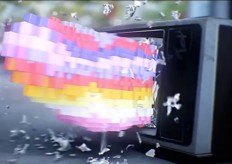 that was beautiful and action packed.

Beautiful how get that 2D Look result in 3d???